Its been a few weeks since Chris and I travelled out to Lesotho on our fact finding trip. We’ve had a lot to think about.

The Scope of the Need
The major thing we were hit with was the massive scope of the need that exists in Lesotho when it comes to supporting orphaned children. According to Unicef there are an estimated 220,000 orphans in Lesotho. That’s more than 10% of the population of the entire country. Of those, 125,000 are characterised as “vulnerable”. A vulnerable child is defined as: “any person who is below the age of 18, who has one or both parents who have deserted or neglected him/her to the extent that he/she has no means of survival and as such is exposed to dangers of abuse, exploitation and/or criminalisation and is, therefore, in need of care and protection”
Diny, one of the amazing ladies we met on our trip, sent us on a list of all the care facilities caring for orphaned vulnerable children in Lesotho and the numbers of children they support. Combined they care for 2,612 children across the country.
It doesn’t take a mathematician to realise that there’s a massive gap between the number of orphaned vulnerable children in the country (125,000) and the number currently supported by care facilities (2,612).
That’s roughly 123,000 vulnerable orphans still in need of help!
While it may only make a small dent in the numbers we feel that our journey will move towards establishing new projects and supports for at least some of those children who are currently without assistance.

What Can We Do
At times we’ve found ourselves overwhelmed by statistics like the ones above. It can seem impossible to make a significant difference. However, we remind ourselves that those statistics represent actual lives; kids as beautiful, and deserving and full of potential as any of our own and that it’s always better to do something, however small, than nothing at all.
One great resource we have going for us is Chris and Sheila Dillon. Chris and Sheila were part of the first team from Liberty who went out to Lesotho in 2013. They came back with a determination deep within to do something for the Kids they encountered on their trip. So much so that they have decided that they are willing to go out to live in Lesotho and establish a project there. While we don’t know exactly what that’s going to look like yet some of our next steps will be to get them out there and get something started!

Next Steps
So how do we figure out what to do next? I think It will be important to get our feet on the ground again and to continue to seek out where God would lead us to focus our attention. With that in mind we plan to run a team out to the Pulane Children’s Center again in 2016. That will give us the opportunity to continue to support Jill and her team in the incredible work they do at Pulane as well as figure out some of the practicalities of moving forward with a new project in Lesotho.

One Day is Registered with the Charities Regulator in Ireland. Charity Number: 20203401
0 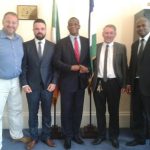