Hey Everyone, Rob Duff writing this. It’s been way too long since we’ve updated you all.
At the beginning of this journey we were quite good at keeping everyone in the loop with what was happening but as things have accelerated over the last year we’ve gotten so busy doing the work of the project that it’s been hard to find the time to post regular updates. So, with all of that being said, here’s a mega-update of what’s happened in the last year. As you’ll see we’ve made some giant strides.

Chris and Sheila had finished the construction of our first 2 houses. They did an incredible job. Each house has 3 bedrooms a living room and a washroom. The model of Care we are working towards is to try and create a community of small family homes where kids will be raised by full-time live-in house parents who love the children and care for them as they would their own kids.

At this stage the houses had been finished for a couple of months and we needed to get everything else in place so that they could become homes to children in need. We needed to hire our first house parents and to sign a Memorandum of Understanding between the One Day project and the government body in Lesotho responsible for the care of Orphaned & Vulnerable Children, the Department of Social Development so that they could identify and place children into our care. 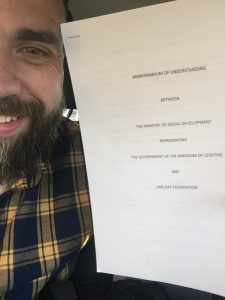 We Have an Agreement!

With that in mind Sharon Kenny and I headed over to Lesotho for a short trip to try and get those things achieved.
Thank God, everything went according to plan, well, as much as a plan as you can have in Lesotho 🙂 We hired our first House Parents Ntate Mohau and Mme Mamaropeli, and brought them through some induction training. We also managed to finalise our agreement with the government and sign off on it, bringing to an end a 9-month process of discussions back and forth between Lesotho and Ireland. Sitting back in my car with the signed memorandum in my hand was a moment I’ll never forget. Everything was now in place to be able to welcome our first kids.

THE KIDS ARRIVE
June 4th 2019: 2 brothers, Karabo and Poelo, arrived in HaLebesa understandably nervous about this new place they’d been brought to. They’d come from a nearby village where at just 9 and 11 years old they’d been fending for themselves for some time. Everything we’ve been working towards for the past 4 years came to fruition at that moment when they were welcomed with open arms by Chris and Sheila and led by the hand into the home that had been built for them. Over the coming days their worry subsided and we got to see their personalities shine as they settled into their new family.

Since then 9 other kids have joined the boys at HaLebesa. There’s Mafa, a 12-year-old boy who arrived in August. Mafa’s arrival was a strange one for us. The Department arrived on site one day to ask if we could take this boy who was due to be released from a local clinic where he’d been for a few weeks suffering from malnutrition. Their request came with the ominous statement that he couldn’t go back to his own village because the people there were afraid of him. Patrice and I were in Lesotho at the time and we sat and talked with Chris and Sheila about what to do. We were worried about what this kid could have done to make people afraid of him. All of those worries disappeared when Mafa arrived the next day. He is a beautiful little boy with some physical and mental disabilities. The fear from the people in his village came from the stigma attached to disabilities in some parts of Lesotho. Over the past few months, the love and attention of his foster parents and the community at HaLebesa have created an environment where Mafa has come on in leaps and bounds. He’s a bundle of energy and fun and keeps everyone on their toes. He’s learning how to communicate with people and has even said his first words “Apples”.

Soon after, our first 2 girls arrived Lihaelo (9) and Malimakatso (14) followed by a girl named Mabopelo (16) and another boy named Khotseng (13). Our family was growing slowly but surely. Next came 3 siblings a boy named Molefe (3) and his 2 sisters Tholang (6) and the baby of the family Mamello aged just 18 months. Finally, just last week, a beautiful little girl named Bohale came to join our family. At times it’s overwhelming to think that we get to be involved in all of this. The lives of these 11 kids are forever changed. They’ve all been rescued from dangerous situations and welcomed into a place of safety, love and hope. 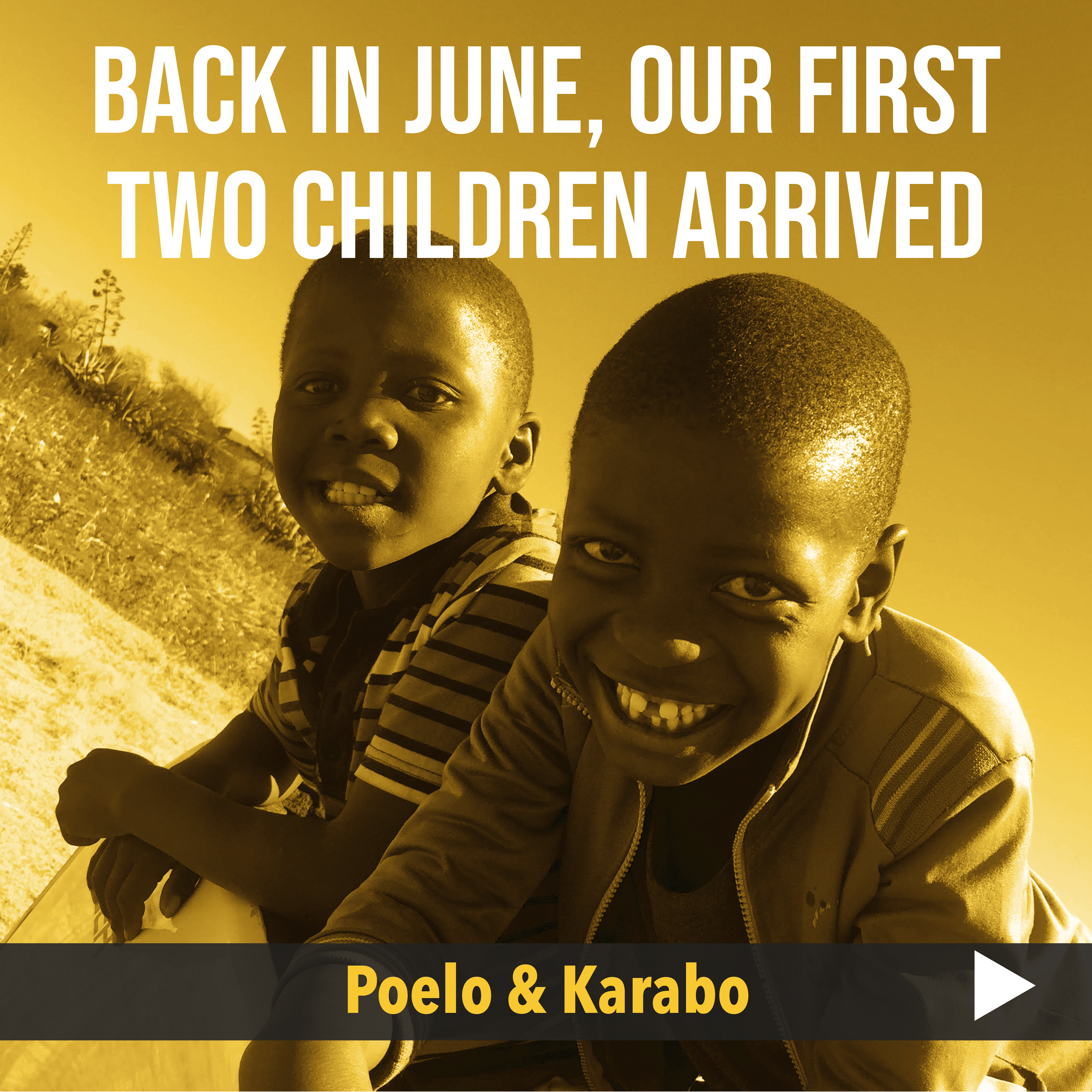 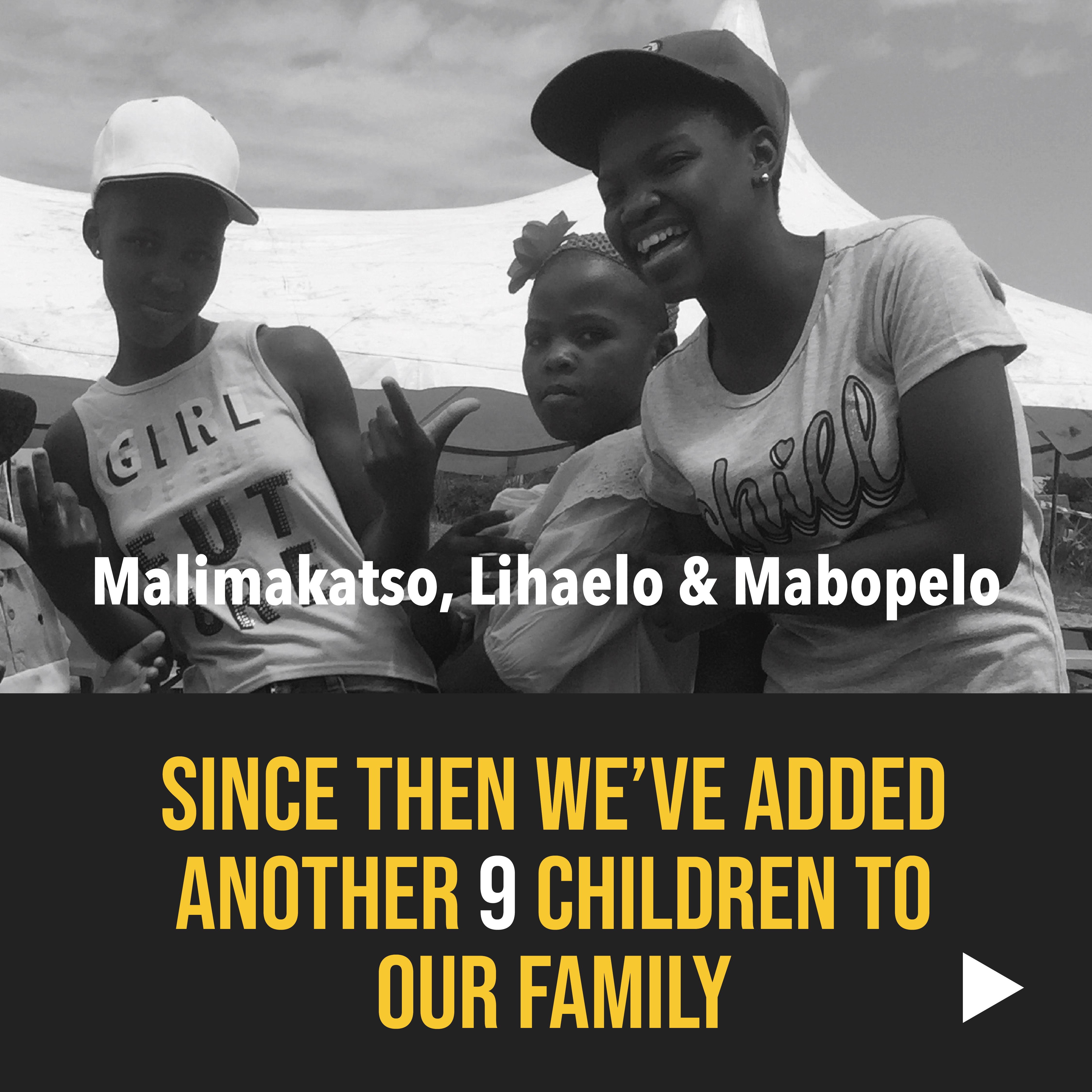 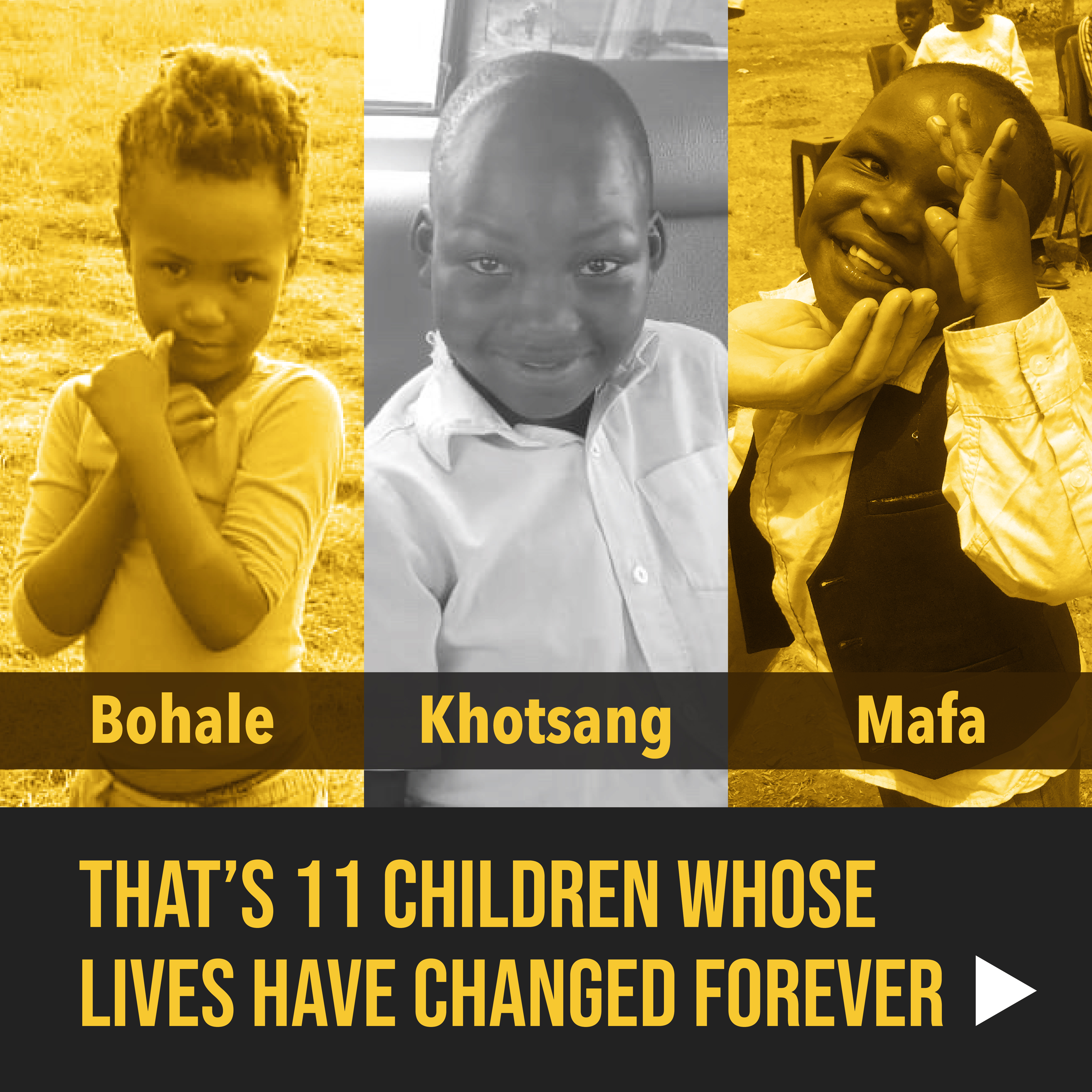 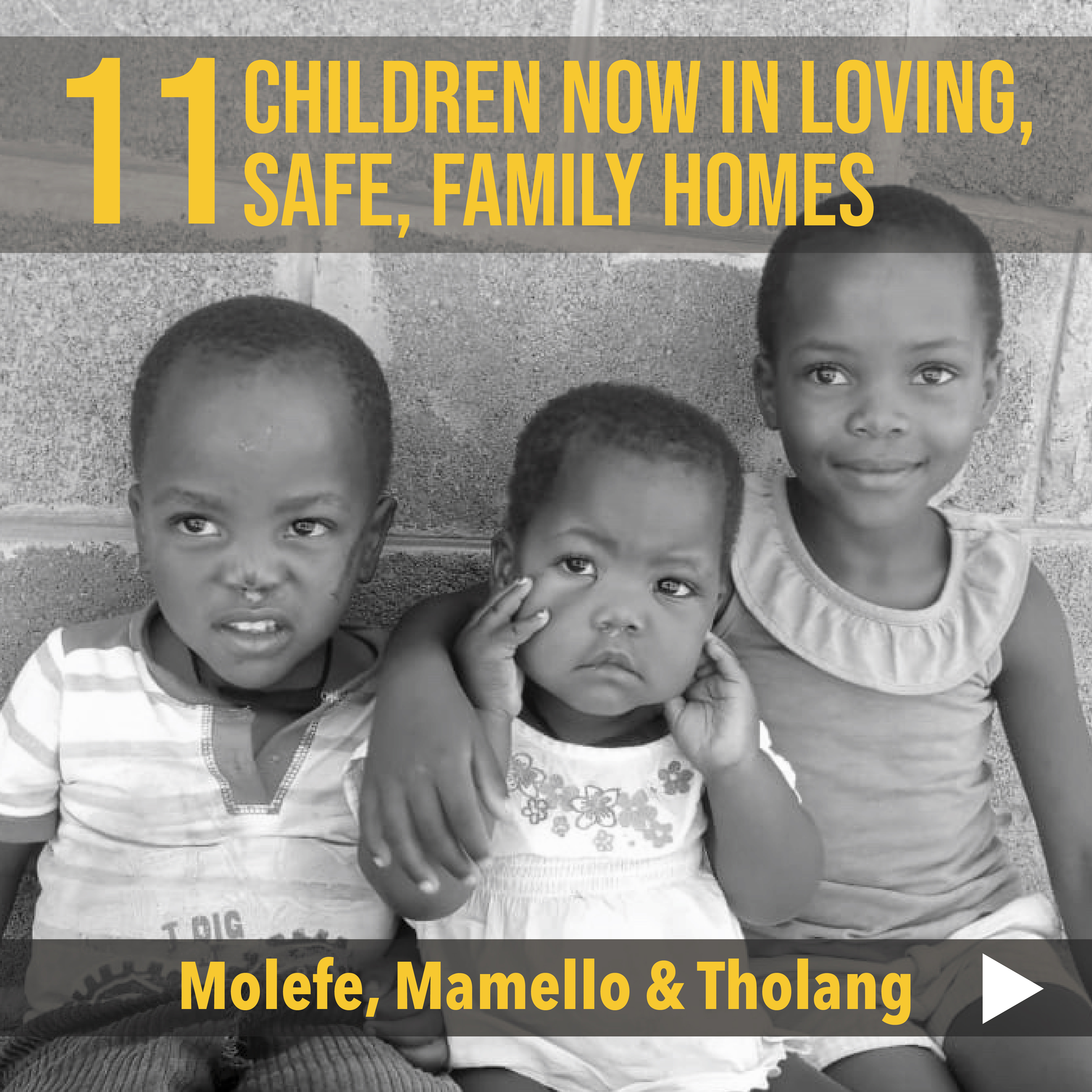 SUMMER TRIP
In the Summer Patrice and I along with our 7 year-old, Penny got to spend a month in Lesotho helping out with the project. We were joined by some friends of ours Sam and Sophie Tao. They were a God-send. Sam is an architect back in Dublin and Sophie works as a social worker. We really couldn’t have asked for 2 better people with more relevant skills to help us out. Sam threw himself into helping us make the best use of our land at HaLebesa producing plans for us that will guide or construction work for the next 4 years. Sophie developed and delivered training for our house parents and staff and has become a sounding board for us as we navigate working with children who have been through traumatic experiences. We were so blessed to have them on board. If you’re reading this and have any skills that could be of use in Lesotho and are up for helping us out please get in touch, we need you!

WE STARTED A CHURCH
Somehow this year we found ourselves starting a church in Lesotho. It wasn’t a plan we had but it seemed to be something God had in mind. The ONE DAY project exists as an expression of the love of God for orphaned and vulnerable children. As Chris and Sheila have been demonstrating that love in their daily lives in Lesotho the people in the village of HaLebesa have become interested in knowing more about Jesus. Late 2018 when a team from Liberty Church were on site helping with building work some people in the village asked if we would run a church service that Sunday morning. We pulled together a service under the shade of a big tree that borders our land with music playing through the car stereo of a friend 4×4. It felt like a special moment in God. Following on from that the people asked for a Bible study to learn more. 2 great friends of ours Ntate Brown and Ntate Ntlaba obliged and began a Saturday evening bible study which went from strength to strength week after week.
In what I would describe as a God-directed confluence of events in March 2019 things accelerated. I had been in touch with an incredible organization called Judea Harvest based in South Africa. We had planned to build a large hall on our site that year as space where our children could hang out and where the bible study which had grown too large to continue meeting in a living room could meet. I’d heard that Judea Harvest had a product called a “Snap Church” a modular building that could be erected in just 2 weeks and that seemed to fit the bill for what we were looking for. Talking on the phone with their CEO Kola De Klerk I was inspired and amazed at the scope of the vision these guys have for church planting in Africa. A week or 2 later I found myself in Lesotho talking with Chris and Sheila about the bible study and the potential of erecting a snap church building. With my conversation with Kola still churning around in my head, I found myself asking Chris and Sheila if they thought we should try and turn the bible study into a church plant. They were for it and we agreed to approach Ntate Brown, the bible study leader, about becoming the pastor of the new church. I’m not sure how to describe the decision to do that other than to say it felt right. It’s not the way I would usually go about starting something but then again none of this journey in Lesotho has been predictable. We’re just doing our best to go where we’re led by God. We talked to Ntate Brown and he agreed to come on board as Pastor. Fast forward a few months and there’s a thriving, growing, beautiful family of faith meeting each week in HaLebesa, growing in love for God and each other and reaching out in love to the people around them.

church-tent-day-2
Church in a Tent

LIGHTNING FAST BUILDING WORK
The fledgeling church began to meet in a big tent supplied by Judea Harvest as we planned for the construction of the Snap Church. The erection of the Snap Church is an incredible picture of what can be achieved in a short amount of time when people work together towards something. A group of volunteers from 3 different churches in South Africa (North Hills Church, Outlook Church Richards Bay & Liberty Church) travelled to Lesotho to help out. Through their monumental effort and dedication they managed to erect the snap church in just 6 days Which has to be some kind of record! In less than a week the church were out of the tent which had all but blown away in the high winds on the mountain top and into their own building. That building has since become a hub of activity For ONE DAY, The church and the community of HaLebesa. We are so grateful to everyone who pulled together to make it happen and to Judea Harvest for partnering with us.
A week later our yearly trip of Irish volunteers arrived out expecting to help to build the already completed snap church but there was plenty of other things to get stuck into. They worked hard on adding the roof and internal walls to our next 2 houses which Chris completed when they returned home.

So here we are entering into 2020 with 4 houses and a snap church built, A vibrant growing church established, A full-time team of 7 people working for the project and most importantly, 11 kids added to our family. God is Good.
Rob